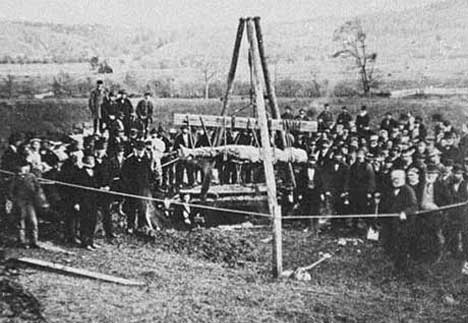 On October 16, 1869, on a farm in tiny Cardiff, New York, workers discovered a ten-foot stone giant buried within the earth. The so-called “Cardiff Giant” soon became a national sensation and one of the biggest news stories of its day.

While newspapers devoted daily headlines to the story, more than 100,000 Americans flocked to exhibitions in New York and Boston, believing that the petrified giant roamed the continent in Biblical times. Prominent scientists likewise endorsed the archaeological wonder.

All of them were unwitting players in America’s greatest hoax, and the mastermind — a small-time confidence man with a gigantic grudge — was laughing all the way to the bank.

A Colossal Hoax is the first non-fiction book to present the full history of the Cardiff Giant hoax.

"Tribble has taken a humorous topic and created an excellent historical narrative that develops the incredible story within the social and intellectual climate of the times. The unusual topic and Tribble's vivid detail make this one of the finest and most entertaining historical works I have read."– Benjamin Baker in Academia (Profilers' Picks), April 2009

"Highly detailed and thoroughly researched book....Tribble tells it the way it should be told, by focusing on its players....The author also puts the hoax in its historical context."– David Pitt in Booklist (Starred Review), January 1, 2009

"Deeply researched, perceptive history...In Tribble's readable and thoughtful account, George Hull's spectacular, short-lived fraud reveals a great deal about American culture in an era in which frauds of all sorts abounded, and in which Americans dared to question the truthfulness of both revealed religion and modern science."– Chris Rasmussen, Fairleigh Dickinson University, in Annals of Iowa (2010)

"Engagingly written in a thorough treatment that this popular culture phenomenon has not usually received, the book would make a welcome addition to public libraries."– Frederick J. Augustyn Jr., Library of Congress, in Library Journal, October 1, 2008

"It is clearly the definitive work on the subject."– Joe Nickell in Skeptical Inquirer, May/June 2009

"Fans of phony biblical giants and sideshow hooey will be pleased to know that an exhaustively researched book about the Cardiff Giant has now been published. In A Colossal Hoax: The Giant From Cardiff That Fooled America, author Scott Tribble not only relates the 'tall' tale of this manufactured mega-man, but also puts the craze in its proper Civil War era context."– Anne D. Bernstein on RoadsideAmerica.com, April 30, 2009

"Tribble's detailed (including photos) and well-researched account focuses on the men involved and the culture of the times."– Neal Wyatt in "Fool's Gold: A Treasury of April Fool's Reads," Library Journal, April 1, 2012

"A Colossal Hoax is an exceptionally well-written narrative that is surely destined to become the definitive work on the Cardiff Giant, which is, itself, the definitive historical hoax in nineteenth-century America."– Kenneth Feder, Central Connecticut State University

"In rich and often entertaining detail, Scott Tribble recovers the colorful case of the Cardiff Giant, along the way taking his reader on a sort of backstage tour of mid-nineteenth-century America, a place where science and faith, business and entertainment, philosophy and humbuggery could come together in some sensationally wacky ways. Astoundingly well-researched, A Colossal Hoax is also an absorbing and rewarding read."– Judith Richardson, Stanford University

Or order directly from the publisher »

Scott Tribble is a freelance writer. His articles have appeared in the St. James Encyclopedia of Popular Culture, TIMELINE, and Boston Globe. Tribble graduated from Harvard College and has a master’s degree in American Civilization from Brown University. A native of Boston, Tribble lives in Columbus, Ohio.